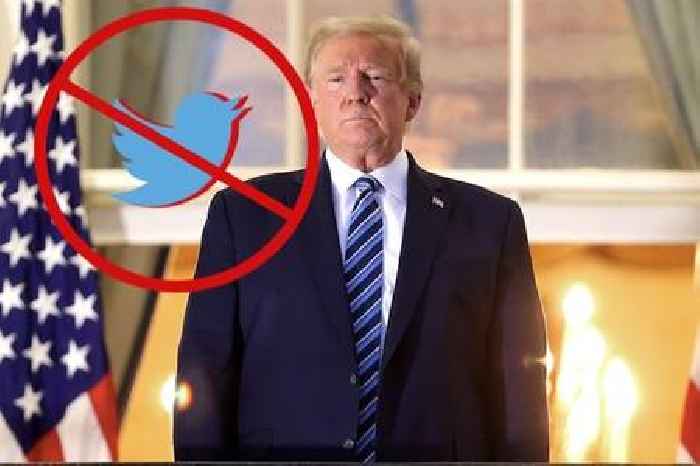 Twitter is taking its permanent ban of ex-President Donald Trump seriously, with the company on Thursday suspending an account for sharing comments Trump made on his new website.

The @DJTDesk account was suspended after taking messages from Trump’s “From the Desk” site and reposting them on Twitter. Trump launched the website on Tuesday, allowing him to send out tweet-like messages to his fans (and detractors). Visitors to Trump’s new site can’t respond to his messages, but they can reshare his comments on Facebook or Twitter by clicking icons next to his posts.

The spokesperson did not immediately respond to TheWrap asking how long the @DJTDesk account was suspended for.

Twitter’s “ban evasion policy” prohibits a “range of behaviors,” as the company puts it, including accounts that “imitate a suspended account.” Accounts are also barred for allowing “someone who has been permanently suspended from Twitter to permanently take over or temporarily operate” their Twitter handles.

The @DJTDesk account was not affiliated with anyone on Team Trump, a Trump-tied source told The New York Post on Thursday.

Trump was banned from Twitter on Jan. 7, one day after some of his supporters stormed the U.S. Capitol, with Twitter citing “the risk of further incitement of violence” as its main reason for the ban. Facebook took a similar course of action and “indefinitely” banned Trump from Facebook and Instagram.

On Wednesday, Facebook’s “Oversight Board” said the company’s ban was “justified,” but that it needed to decide whether the ban was permanent or would end at some point. For a full breakdown of the Oversight Board’s decision, click here.

Trump ripped Facebook, as well as Twitter and Google, soon after the Board’s decision was shared on Wednesday.

“What Facebook, Twitter, and Google have done is a total disgrace and an embarrassment to our Country,” Trump posted on his new site. “Free Speech has been taken away from the President of the United States because the Radical Left Lunatics are afraid of the truth, but the truth will come out anyway, bigger and stronger than ever before.”

Twitter Inc suspended several accounts this week that were set up to share statements from a new part of former U.S. President..