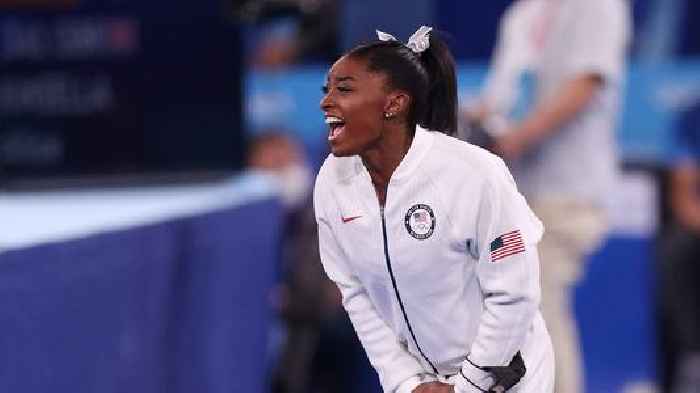 Following her withdrawal from two 2020 Tokyo Olympics events to focus on her mental health, Simone Biles expressed gratitude for the torrent of supportive responses from fans and fellow athletes alike, saying they “made me realize I’m more than my accomplishments.”

Biles withdrew from the Tokyo Olympics team gymnastics final yesterday and bowed out of individual all-around competition on Wednesday. USA Gymnastics says she will be evaluated before she will decide whether or not to participate in her upcoming Olympic events, which begin Sunday with vault and floor exercise.

Biles said in a tweet Wednesday night, “the outpouring love & support I’ve received has made me realize I’m more than my accomplishments and gymnastics which I never truly believed before.”

Biles has devoted almost her entire life, from the time she was 6 years old, to women’s gymnastics, and won four Olympic gold medals in 2016. The 30-time Olympic and World Championship medalist is the most decorated American gymnast ever and was considered a favorite to win gold in the summer Olympics. Still, Team USA Gymnastics praised her decision to withdraw this week.

“After further medical evaluation, Simone Biles has withdrawn from the final individual all-around competition at the Tokyo Olympic Games, in order to focus on her mental health,” USA Gymnastics said in a statement on Wednesday. “We wholeheartedly support Simone’s decision and applaud her bravery in prioritizing her well-being. Her courage shows, yet again, why she is a role model for so many.”

Biles told CNBC she was experiencing a mental state she called “the twisties,” which she first noticed during practice sessions. Robert Andrews, a mental health expert who worked with Biles from 2013-2017, said he approved of her decision and explained to NBC what the mental block was like.

“The twisties… it’s a symptom of the brain being overwhelmed with too much stress, pressure, and anxiety,” Andrews told CNBC. “In essence, the brain is saying it’s not safe enough for you to do these incredibly difficult skills, and if you do, you’re at serious risk of injuring yourself, so she is wise to listen to her brain and her body.”

Biles was also vocally supported by former Olympic swimmer Michael Phelps, who applauded her choice to focus on her mental well-being. “I hope this an eye-opening experience for Americans, it’s so much bigger than you can imagine. It’s going to take time and hard work as we support our athletes in this,” Phelps said during NBC’s Olympics coverage July 27.

Biles has seen her fair share of trauma throughout her Olympic career; She came forward in 2018 as one of the more than 100 girls and women who were sexually abused by former team doctor Larry Nassar. Biles also disclosed in her documentary series “Simone Vs Herself” she almost quit the sport after learning the Tokyo Olympics wouldn’t take place in the summer of 2020 as planned because of the COVID-19 pandemic.

the outpouring love & support I’ve received has made me realize I’m more than my accomplishments and gymnastics which I never truly believed before.